If there will be any commerical posting then it will be deleted. Your user account will be deleted too.
This forum is not indexed by Google and other search engines.
Napísať odpoveď
1 príspevok • Strana 1 z 1

Hi
I just registered to this forum as a new membe and I am still a new user with restricted permissions. My first impression is that I am really impressed of all your activities and that Ican learn a lot of thing by scrolling through this forum.

I found quite a few radiosondes here in Hamburg (Germany). For a list of my finds with links to all documentation and links to a German language blogg with pictures you can find here.

Last week I was in Prague for a conference. I brought an RTL-SDR and a selfmade 1/4 lamda antenna for all cases. I realized that last week the sondes were landing very close to the launch site Prague Libus. I saw N3140812 landing directly in the city, computed a Tawhiri prediction and decided to quickly board the metro to rush to the site at the road Křižíkova. Directly at my prediction site I saw a young man apparently searching for something. "Looking for the radiosonde?" I asked him, and Jiri said "yes". He had arrived at the site 5 minutes after landing (me perhaps 25 minutes), and he had already discovered the balloon hanging in a tree. He had a receiver and a yagi antenna in his bag but there was no transmission from the sonde any more. 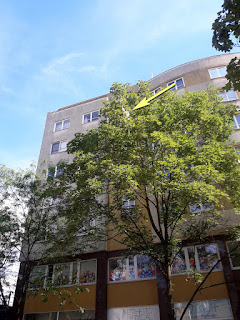 The line had been torn apart and was hanging in the tree, but there was no sonde. We quickly joined forces to search the area. Jiri emphazised that I should sign up for radiosonda.sk

We asked some workers on a construction site. We looked for any part of the cord hanging from other trees or from the roofs. No joy. After some time we gave up. He went home and I returned to the metro station. After some steps down the road I saw this at the bank of the road: 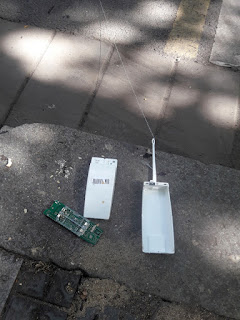 I recovered everything, but the batteries and the sensor arm were missing. Obviously a car had hit the sonde directly after landing and ripped it off the balloon rest.

Next morning I decided to hunt for N3140911, the night sonde from Prague Libus. Same method - I left the hotel, sat down at a spot with a good horizon, got the sonde down to a GPS altitude of 565m, computed a Tawhiri prediction. Then I took the first metro to the Jinonice station and walked to the landing site. This time the sonde was still transmitting and was about 90m off my prediction. The sonde was on the ground, and the balloon was in some bushes. Easy to recover. I returned home, took a breakfast and went to my conference. 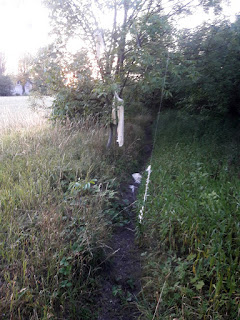 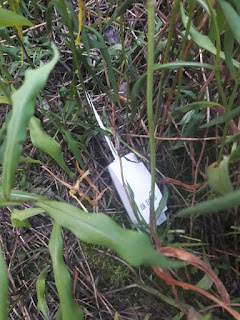 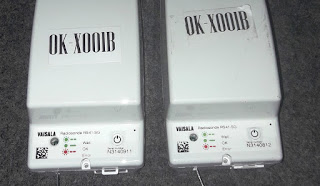 This was my 6th time a visited Prague. I knew this is a beautiful city, but this time I learned what a nice place to do some radiosonde hunting it is.